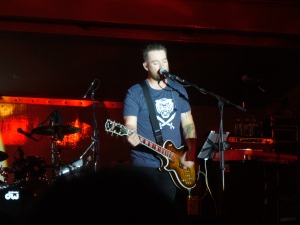 My friend and avid fan of David Cook said to me, “You’ll never guess where David Cook is playing.” Could it be Madison Square Garden where she used to work? No, it’s John Burns Park in Massapequa. I’m thinking Cook is way too big for the Town of Oyster Bay Music Under the Stars 2014 Concert Series, but along with Vince Neil and Gin Blossoms, he fits the bill.
Music is scheduled to start at 8 pm but we arrive at 5, picnic food in hand, and score a great spot for our lawn chairs. As we watch the crowd rolling in, I’m noticing Cook has built a solid following of “women of a certain age”, myself included. It also makes sense that college age girls are also well represented, since they would have been in their mid-teens when Cook won season 7 of American Idol back in 2008. The crowd covers a broad range of families and seniors out to enjoy free music on a beautiful summer evening.
At precisely 8 pm, the Town Supervisor, John Venditto is introduced and begins a 15 minute “opening act” consisting of the singing of the national anthem, thanking the many generous sponsors of the event, and providing face time for all the local officials.
Cook takes the stage and immediately gets the audience on their feet with “Paper Heart”, followed by “The Last Goodbye”. He says that he will be taking the opportunity to try out some new music and his “Laying Me Low” and “Eyes On You” both get tremendous audience response.
I’ve listened to Cook’s albums and television performances, but as my first live show, I realize that the anthemic quality of his act comes across best in person. The super tight drums and bass pound through songs like “Declaration” and “The Last Goodbye” while Cook’s memorable lyrics and melodies focus the power of the chorus. Cook and his lead guitarist play keyboards on a few songs but my one wish for this band’s lineup would be to add a full time keyboardist with strong backing vocals.
During Cook’s tenure on American Idol, he showed an artful talent for finding and arranging well-known songs to fit his own musical identity. For this show, his covers of Bruce Springsteen’s “Secret Garden”, Chris Isaac’s “Wicked Game”, and Led Zepplin’s “Rock and Roll” and “Whole Lotta Love” showcase his ability for making a song his own. He even goes a step further by reinventing his first release “The Time of My Life” as a pseudo-acoustic number, strumming his left-handed Les Paul sans band and having the audience sing.
I admire that Cook has been touring with the USO to entertain American military overseas. He’s become a seasoned performer and reveals his warmth and sincerity as part of his showmanship. With his arsenal of talent for songwriting, singing, performing, and arranging he shouldn’t have any problem moving past the loss of his RCA record deal.