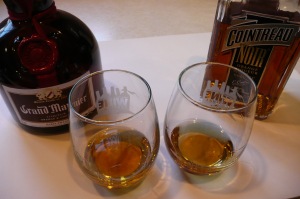 There are a copious number of clear orange flavored liqueurs knows as triple sec on the market including Cointreau which has been around since 1849. On the flip side, Grand Marnier, with its blend of orange and cognac, has stood out from the pack since inception in the 19th century. Gran Gala, made with orange and brandy, has been the most serious competition for Grand Marnier in recent years. Now Cointreau has introduced a new challenger in this space called Cointreau Noir. It’s a blend of the original triple sec with Remy Martin cognac.

We’re tasting the Cointreau Noir and Grand Marnier neat and at room temperature. I originally poured in shot glasses, then realized I couldn’t get my nose into it and switched to the wider sampling glasses. Cognac is dominant in the nose of the Grand Marnier while Cointreau Noir puts the emphasis on the orange. This difference in the cognac/orange balance is supported by the caramel color for Grand Marnier and the lighter, clearer and more orange appearance of the Cointreau Noir.

On the palate, the balancing act between orange and cognac continues. While both liqueurs are 40% alcohol, the Grand Marnier exudes more alcoholic heat. It’s comprised of vanilla notes and fresh, lightly sweet orange. The Cointreau Noir has a bigger flavor profile, possibly due to the dominance of the fruit. The orange flavor is also natural and fresh but in contrast to Grand Marnier, combines both the sweetness of an orange with the bitterness of orange rind. The understated cognac flavor in the Cointreau Noir is more nutty than vanilla.