At about the turn of the millennium, we had job opportunities in a different state and began talking about the possibility of moving. In making our house a home, we put a lot of love and care into it and it made me sad to think about leaving it. But the more we talked about a new house and looked at real estate listings, or property for new construction, the more my sadness about the idea of moving turned to excitement.

We weighed the pros and cons of various communities such as property taxes, traffic and commute time. Where is the nearest supermarket? Does the area have good doctors and hospitals? What style house we want? How many bedrooms do we need? Do we want a pool? We aren’t the quick and easy decision-making types. I’ll admit that sometimes we even have trouble deciding what to drink for cocktail hour. So choosing a new house required long hours of research and deliberation.

Through the months of conversations about moving, we are unaware that our plans are being overheard. In the kitchen, and laundry room, and basement, they’ve been listening. They become angry that they will be left behind, abandoned after years of faithful service. They concoct a scheme to retaliate. One by one they will refuse to work and punish us for leaving them. Major household appliances unite and plan to strike! 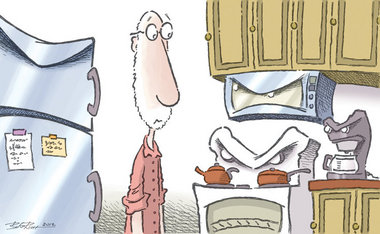 My first encounter with the major household appliance strike begins one morning in the laundry room as I drop a load of wash on top of the dryer. Did I just hear a ghostly snicker with sinister intent? Cue the cartoon animated angry machines accompanied by spooky music.

As the washing machine begins the wash cycle, I notice something doesn’t seem right. The agitator is clunking, followed by the spin cycle throwing everything to one side. Inside the machine are chunks of gray debris that look like the accumulation of 10 years of liquid detergent and lint. Maybe all that’s needed is to give the washer a good cleaning with hot water and white vinegar. Unfortunately, the cleaning cycle only leads to more wreckage.

It’s time to call in the big guns for his expert opinion. After a couple of hours of trouble-shooting, the laundry room floor is littered with machine parts and tools. My husband seldom admits defeat, but in this case, the better option is to replace the washer rather than repair it. We’ll have to buy a new one to use for six months until we sell the house. Revenge of the major appliances has begun.

Angered by the abandonment of our eventual move, one-by-one they quit on us. In the months after replacing the washer, the refrigerator and the hot water heater follow suit. All we can hope for is that we sell the house before summer so we won’t need to buy an air conditioner, too.

More than 15 years have passed and we’ve started to talk about moving again. We had forgotten about the appliance rebellion so many years ago and so we haven’t been cautious about discussing the move in front of “them”. Ironically, the washing machine is the first to revolt. A few months later the side-by-side, water and ice-dispensing refrigerator/freezer quits in protest. I wonder which one of them will be next?