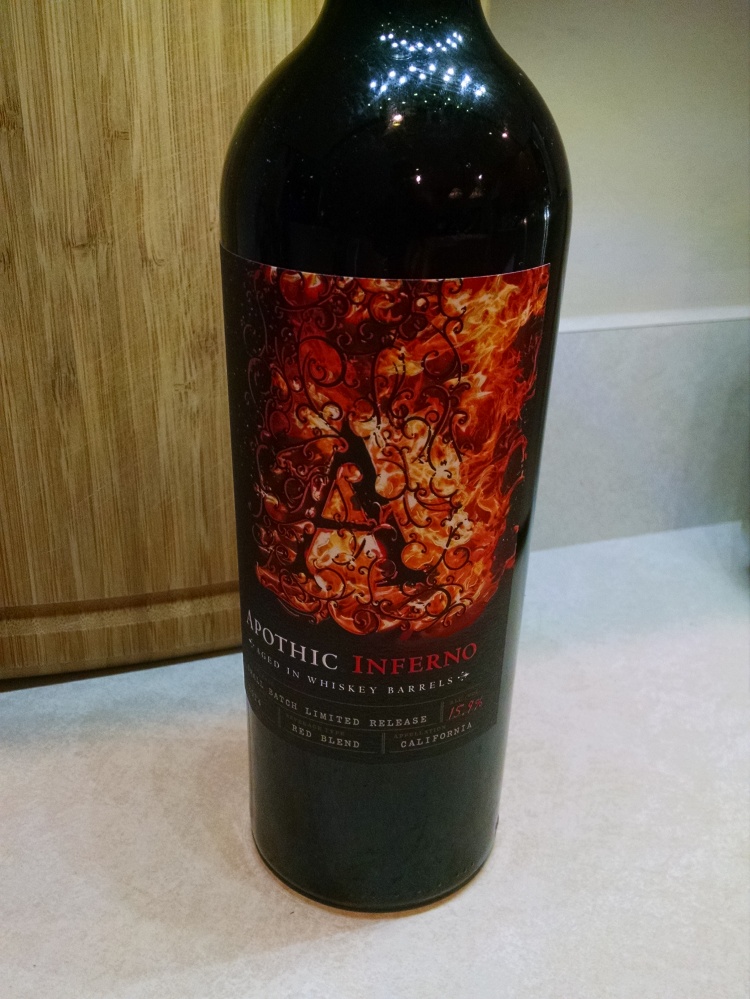 The information on the label tells us that Apothic Inferno is a limited, small batch release red blend made from California-sourced grapes and aged for 60 days in whiskey barrels. The rest of the text, “A new blend emerges from the flames of a time-honored craft, creating a most unexpected and masterful encounter,” seems intentionally vague, sending me on a trip to the Apothic website for specifics.

I’m met with more mystery when I find myself in the shadowy Apothic Cellar where I can have my palm read or add a picture to the Dark Portrait gallery. In the Crush Music room, you can create a song dedication read by a voice eerily similar to the late Casey Kasem.  The Alchemist isn’t ready for visitors yet so don’t forget to sign the Guest Book on the way out so you’ll be notified when he’s open for business.

We discovered Apothic Red and White in 2010 when we owned a wine and liquor store. Despite being mass-produced, they consistently delivered bold fruit flavors with a smooth finish and were a good wine recommendation for buyers on budget.  According to the company’s literature, the name Apothic was inspired by Apotheca, a mysterious place where vintners of the Middle Ages blended and stored their most coveted concoctions. Beguiling hype aside, apotheca is the Latin root apothecary, referring to a person or place where herbs, spices, and wine were sold.

Apothic Red is a blend of Zinfandel, Merlot, and Syrah, and the White is comprised of Chardonnay, Reisling, and Pinot Grigio. I noticed that as new labels were added, the website became less forthcoming with the varietal information. As per other sources, the inky, dense Apothic Dark is blended with Petite Sirah, Cabernet Sauvignon, Petit Verdot and Teroldego, and the lighter-bodied Apothic Crush is a blend of Petite Sirah and Pinot Noir.

Apothic’s newest offering, Inferno, upends cask aging by using barrels previously used for whiskey. Isn’t it usually the other way around? Cask-finishing spirits in wine barrels is a technique that’s been used since the 19th century. The essence of the wine that remains in the wood adds subtle flavors and colors to the spirit. Will the process work in reverse, where nuances from a whiskey barrel will enhance a wine?

The Apothic Inferno pour is medium-bodied, lighter than Apothic Red or Dark, yet fuller than Crush. Along with sweet dark berries on the nose is a hint of maple candy. Currants on the palate are spicy with some high alcohol heat. The sweetness of blackberry fruit ends in a dry finish, medium in length, and with a reminder of whiskey’s essence at the very last.

Apothic has hit the mark in terms of creating a wine that’s unique, even if the experiment may be perceived as change for change’s sake. If you like some of Apothic’s other wines, this one is certainly worth a try for about $12.